Arthur’s Day refers to a series of music events which were first organized by Diageo, the same company that owns Johnnie Walker, Singleton, Smirnoff, Baileys, since 2009 to promote the 250th anniversary of its Guinness brewing company. This year, I was lucky enough to have been invited to attend the pre-heat mini Arthur’s Day 2013 celebration in Soho, Penang.

07.00 pm – Arrived at Soho Free House at Upper Penang Road where the party was going to be held. 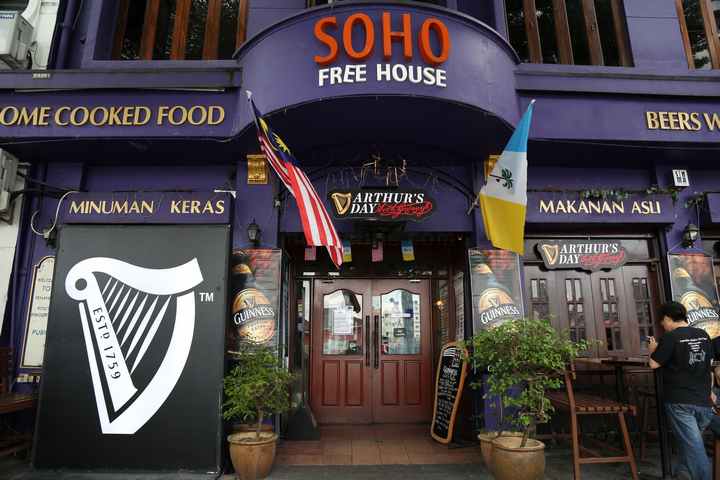 The prices of Guinness for the night was at RM78 each for either one of these 3. 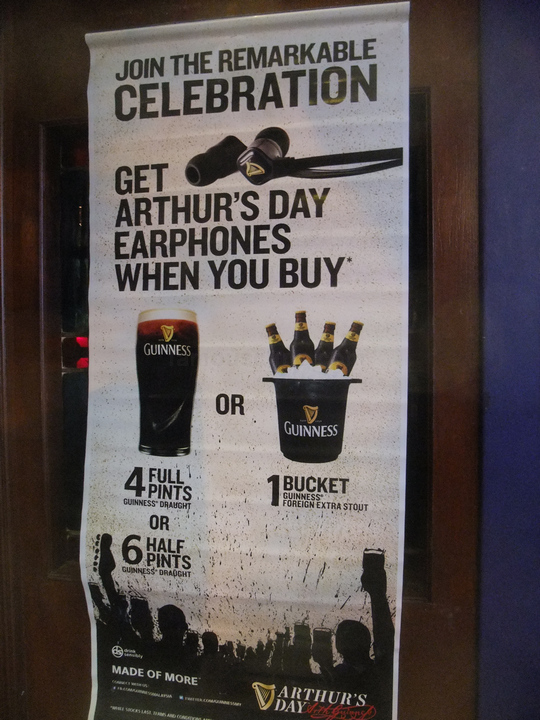 The ticket for 6 half pints of Guinness. 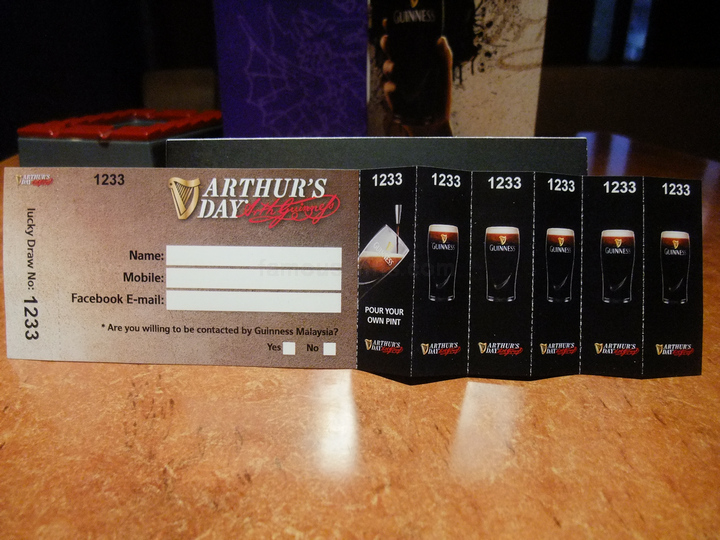 Other promotion items for the night. 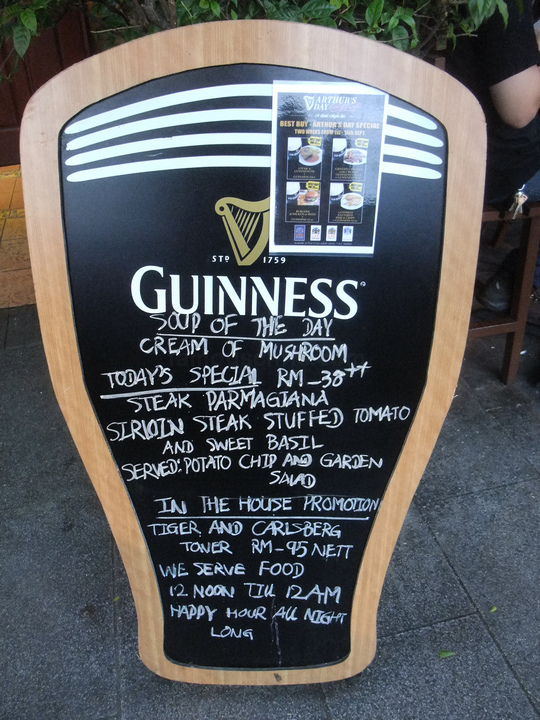 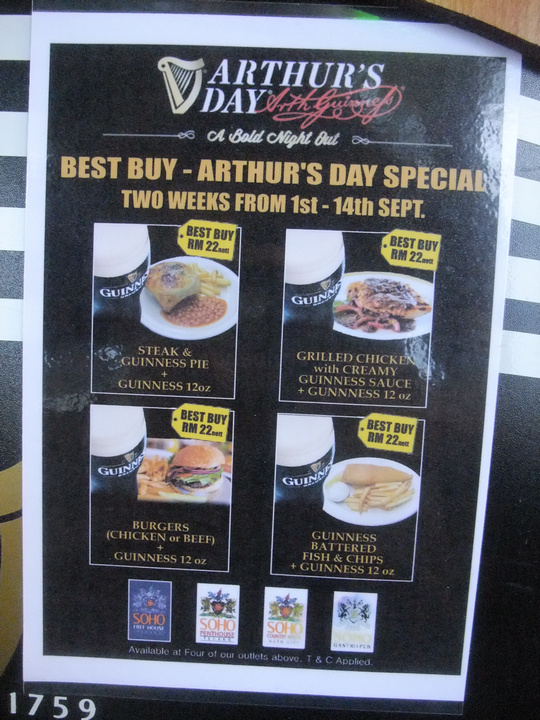 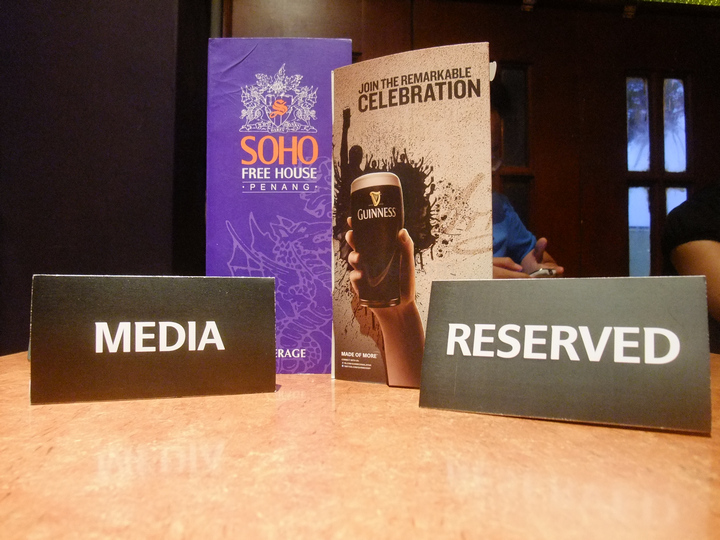 The atmosphere of the place at around 7.30pm. 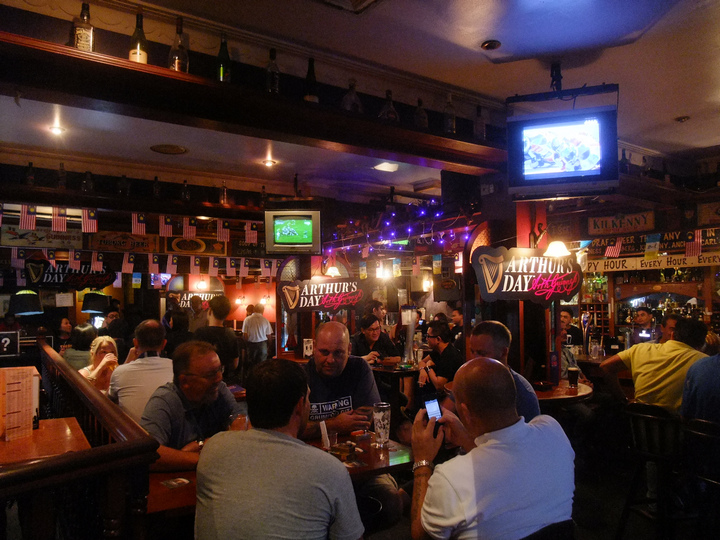 The special goodie bag given. 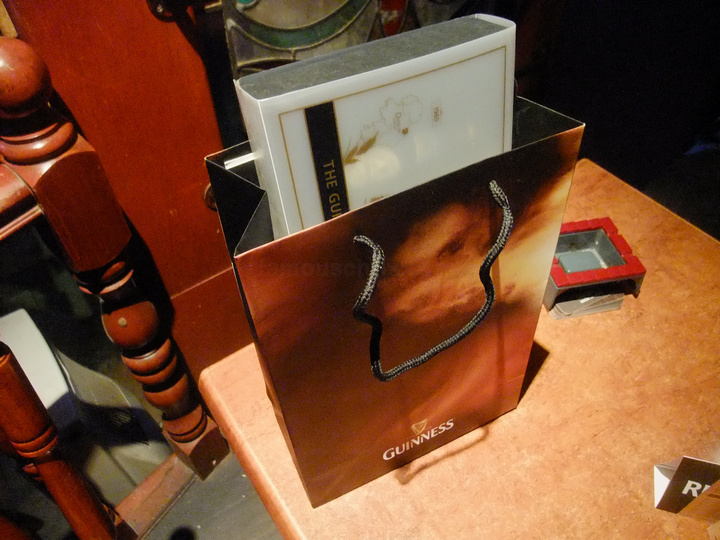 A collector’s item that has the 5 different Guinness Stout bottles that started from 1965 all the way to the latest one in 2008. 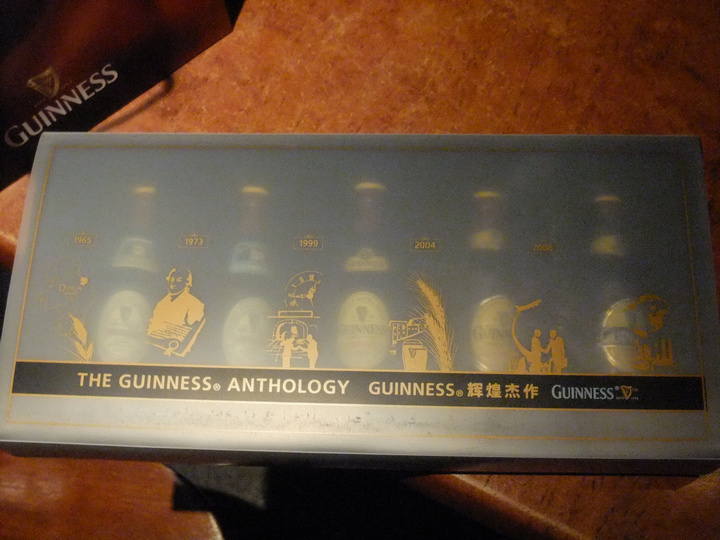 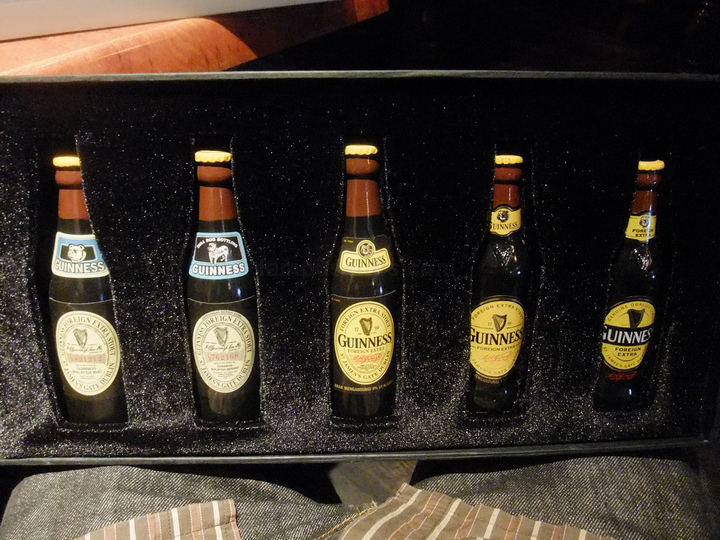 Made my way to the Guinness tap setup for a lesson on how to pour the perfect glass. 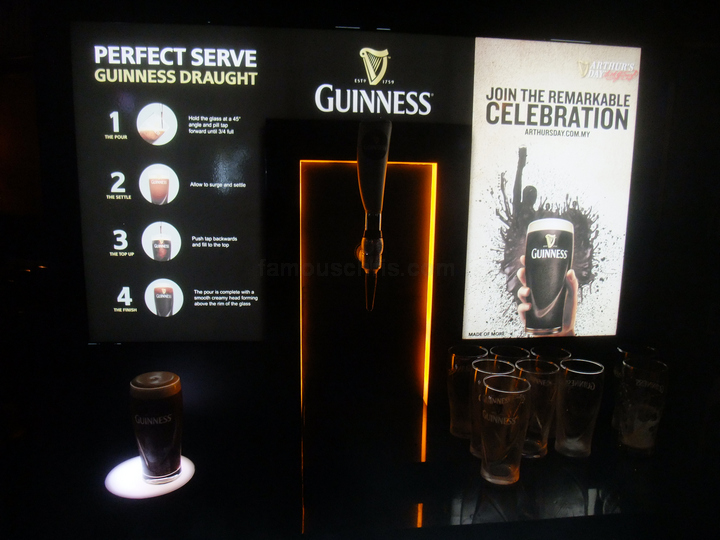 Gerrard, the professional GAB guy from KL, said that you’ll have to fill the glass right up till the bottom of the harp. 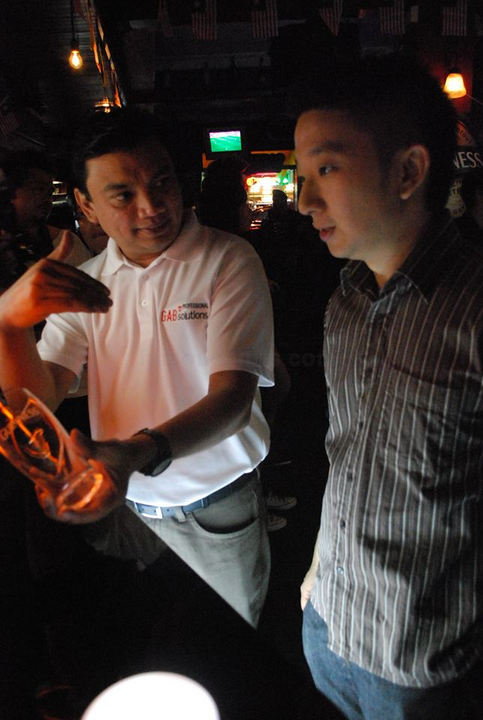 Then let it sit for 1 minute (for half pints) or 2 minutes (for full pints). 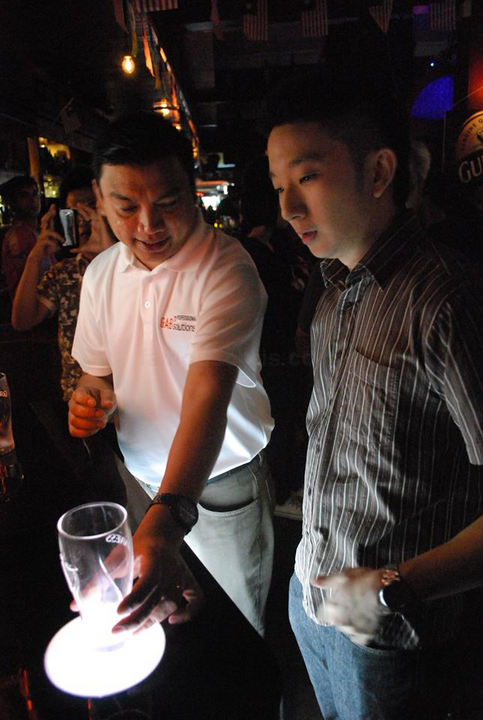 And so I began pouring my very first glass of Guinness draught. 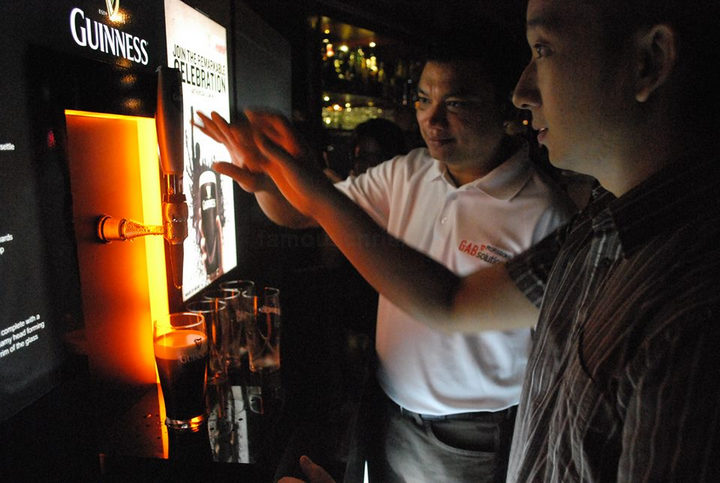 Letting it sit as mentioned by Gerrard. 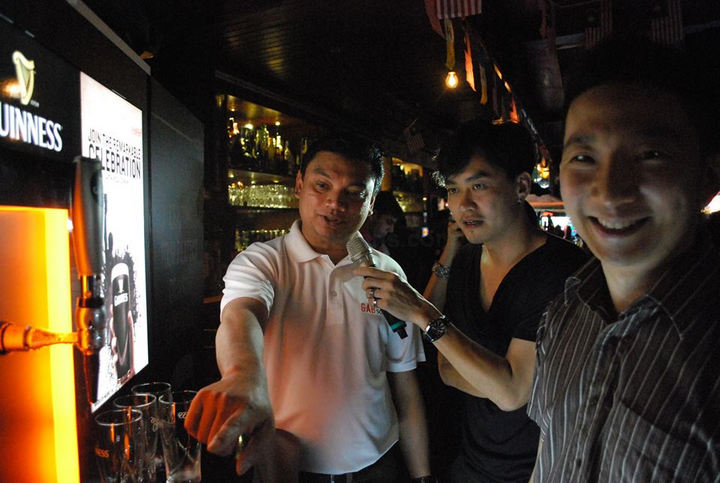 Look at the waves of freshness! 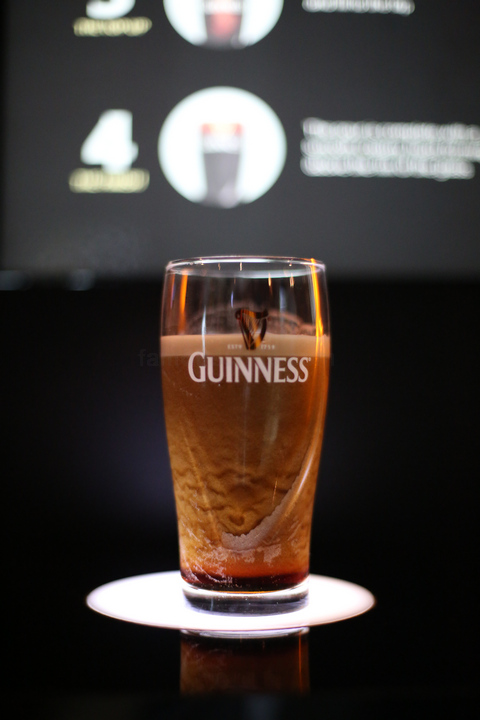 The final pour that fills the glass to the very top. 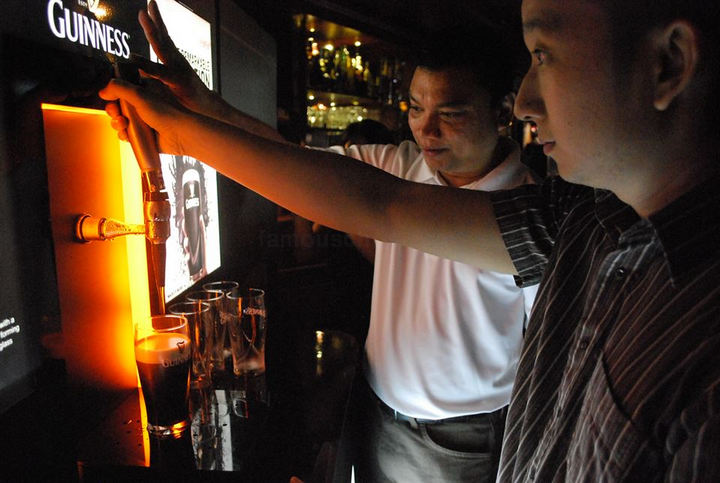 Shouted ‘To Arthur!’ as a tribute to his excellence. 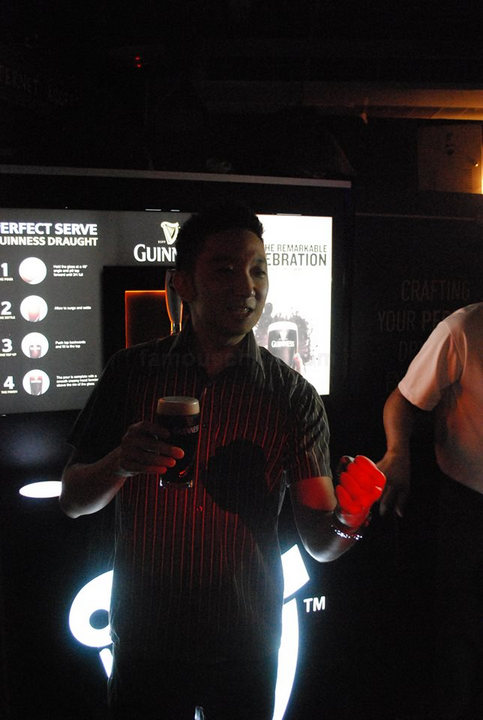 mmMMmmm… it was really good! 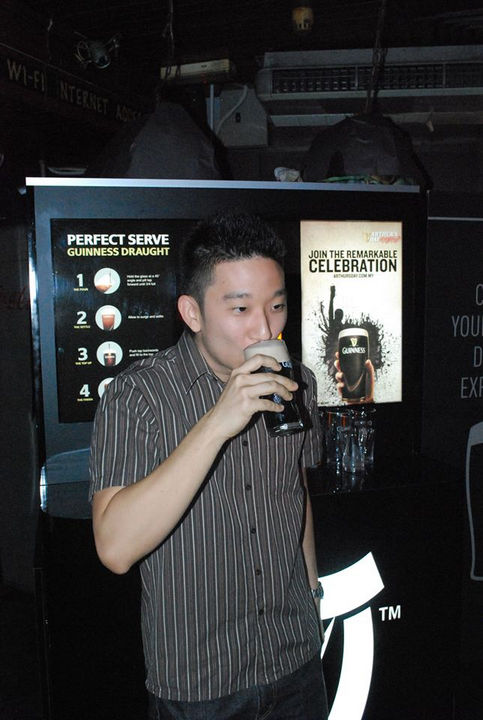 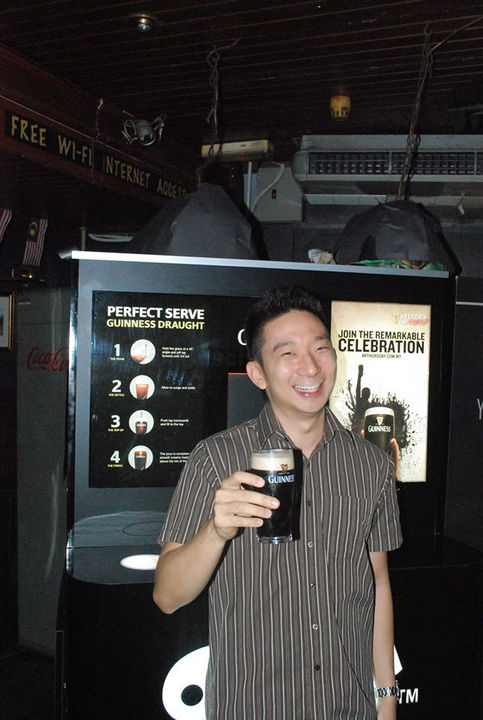 The party continued on way into the night. 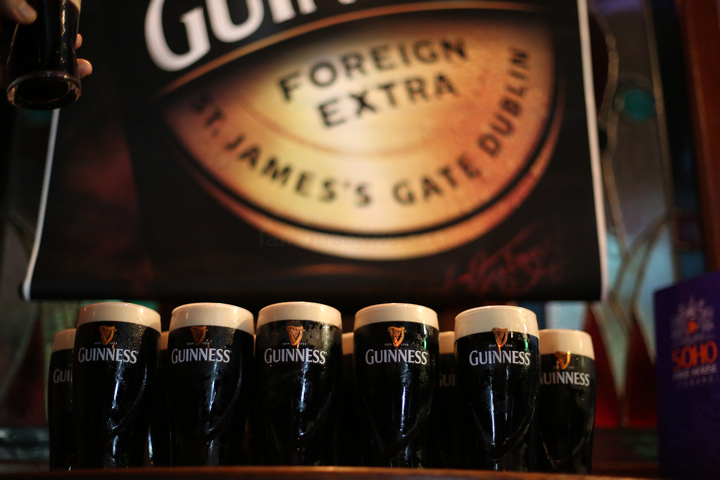 The band that kept singing songs mainly from The Wanted, The All American Rejects and Five For Fighting. 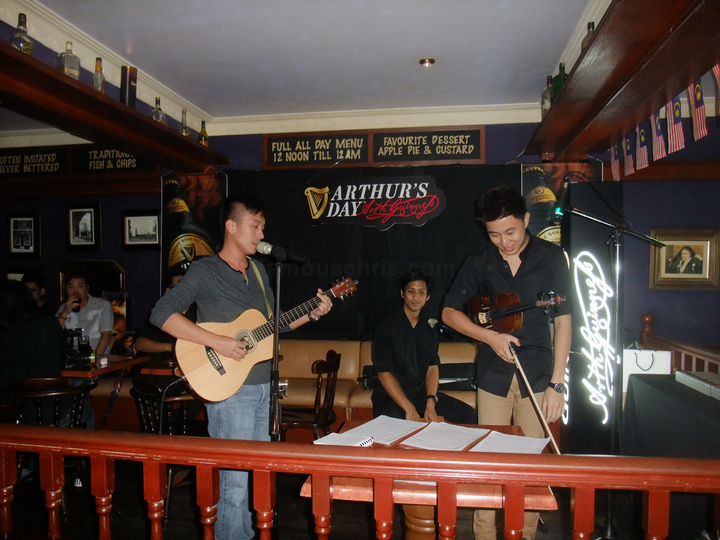 Actually, the real reason of having this event in Soho was to promote the actual Arthur’s Day event on the 27th of September in Sepang International Circuit where The Wanted, The All American Rejects and Five For Fighting are slated to perform. Tickets prices range from RM118 to RM8000 for a 20 pax private cabana complete with a personal Guinness barmaid, finger food and 100 servings of Guinness Draught. Find out more about it here.

Wowza! Had a blast ehhh 🙂

Yeap. Finally learned how to pour the perfect pint!